A few month backs we planned a week away with the kids. The only time Nathan and I could both get off work turned out to be second week of October. We wondered at the wisdom of spending a week in Auckland during the semi-finals of the Rugby World Cup combined with the school holidays, but decided to take the plunge.

These are a selection of the shots I took over the course of the week.

Years ago we discovered the delights of the Hamilton Gardens. There is a section of the park that has been developed in to a series of themed gardens. Each small area is planted and landscaped in a particular style – a Japanese tea garden, an English perennial border, Renaissance Italian, American modernist and more. My favourite is the Chinese scholar’s garden with its turtle pond, arched stone bridge, and ‘mountain’ path through a towering bamboo grove up to a pergola with a view to the mighty Waikato River.

A quick snap, handheld without too much thought to composition. It was the reflection of the hump-back bridge in the pond that caught my eye.

Cropping to correct the composition, I decided to go for black and white to focus attention on the reflections and textures. I sent the file to edit in Photoshop. There I could mask out the lower areas in order to lighten up the bamboo area to further bring out the textures. I also wanted to clone out the distracting white object at the pond edge. The whole image was rather noisy, so I then ran it through Noiseware to clean it up a bit.

Given the chance I would love to go back and set this shot up with a tripod and a bit more time. The lack of sharpness lets its down.

A must-see for any visitor to the city, we spent the whole day enjoying the wonderful selection of animals and birds housed at the Auckland Zoo. The new section which showcases our native animals is fantastic. I recommend it to any overseas visitor. Modern, well layed out, interesting and informative the Te Wao Nui exhibit has a lot to offer.

All the time that we’d been walking around the zoo we could hear a raucous screaming and booming, some kind of monkey we assumed. Finally we found the source, the Siamang gibbons performing for the crowd. Despite having a large, leafy enclosure with plenty of space these guys were all hanging, literally, around the front where all the people watched.

I haven’t processed this shot very much, just a crop for composition, a tweak of exposure and sharpening. I have always found monkeys and apes fascinating, their similarities to us haunting. I wonder what he makes of us.

Another favourite that we visit every time we’re in Auckland, the Museum of Transport and Technology  gets better and better. After spending most of the day in the familiar section at Western Springs we took the tram ride up to the new Aviation Hall . We did not know what to expect up there. Walking around the corner from the entrance foyer, the sight that greats one in the main hanger is stunning. One of those “OMG!” moments. There in front of you towering over all the other exhibits is a Lancaster bomber . 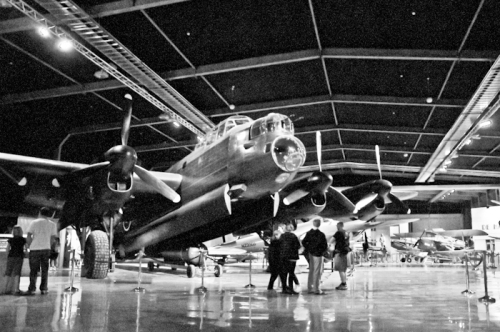 As seems to be the norm in museums these days, the hanger is kept in very low light. I guess this is to protect the artifacts from light damage, but it makes photography very difficult. Moving back as far as I could, widest angle possible, maximum aperture and cranking the ISO up as high as I dared, slowest shutter possible when shooting handheld, this is the best I could get. I’ve brought it up as best I can, it is far from perfect but does portray the majesty of this magnificent plane.

A rainy morning made us decide to visit the indoor attractions at Kelly Tarlton’s. After queuing for close to half an hour we finally got inside. I really don’t know why it takes so long to process people’s money, or why they can’t open another ticket booth, but there you are. I guess management is satisfied that people will wait to enter this icon of the Auckland tourist trail. The snow cat ride around the penguin enclosure was fun. But the real draw is the travelator ride under the domed aquariums, and all the exotic fish species in beautiful well-kept tanks. I don’t know if they have a particular type of glass on the front of the tanks, or if it’s the fact that the public area is quite dark while the interior of the tanks are well lit, but my shots of the fish came out better than I hoped. All have needed noise reduction, but the colours are wonderful and have not been enhanced at all. Best of all, we found Dory and Nemo!

The Aquarium at Kelly Tarlton's

Still raining in the afternoon, we moved on to another indoor attraction. The Auckland Museum is an impressive building perched on top of a rise in the Auckland Domain. Easily able to fill an afternoon, the museum gets better each time we visit. I’d love to know how they got her inside. Through the roof, maybe?

Curses, I missed a bit of the Spitfire‘s wing as I panned these shots. But the stitching programme in ZoomBrowser did a good job with what I gave it, and I’ve made a fairly amateurish job of cloning in the missing bits. Don’t look too closely 🙂

The City of Sails

Our country’s largest city really is quite lovely.

The City of Sails

I took this one as we drove over the harbour bridge. A little bit of the bridge ended up in the frame, but I’ve cloned it out, I think fairly seamlessly. An expanse of gray ripply water is easy to match.

Nathan’s sister, Vickie took us out for a spin in her boat. Sadly no fish were caught, even by Jake our champion fisherman. But we had a lovely time, including a near scrape with a freighter and a trip under the harbour bridge.

I took three shots from a moving boat to create this panorama. The stitch is not quite seamless, but gives a good account of the bridge from the water.

Finally the sun came out so we headed over to the North Shore for the day. The view of the city across the Harbour from North Head is beautiful.

The City from North Head

Landscape photography is not my forte, but I rather like this shot – the contrasts of Devonport village in the foreground, sailing boats and cruise liners, the business heart of the city with the Sky Tower dominating, and the Bombay Hills in the distance. Just a little cropping for composition and a tweak of the black levels brought it up.

A seagull came to visit as we ate our lunch.

The seagull who came for lunch

I took this one with my little Canon Ixus. I still really like that camera, and it’s much less cumbersome to carry on a picnic and beach walk than the Nikon. I lay right down on my stomach on the boat club’s deck with the iconic Rangitoto Island in the background and waited for this cheeky bird to settle – I think he was hoping for a chip, Bro!?

Let me know what you think! Cancel reply