Every year we take the short drive up the Pohangina Valley to attend the Lions Club’s Small Holders Auction.  It is the Club’s major fund raiser for the year and always worth a look.  And I’ve found that there are guaranteed to be some interesting characters, too.

I’d seen this gentleman a couple of times, and snapped him once.  As the morning progressed I spotted him again. He was a distance away and looking more or less in my direction, without the sun at his back which had been the case earlier.  I quickly framed my shot with the farmer as the subject – not entirely sure that he was looking at me.  I always feel a little intrusive taking photos of strangers, so I continued taking a couple more shots over his shoulder so that he wouldn’t be on to me.  Hmm, subtle eh? 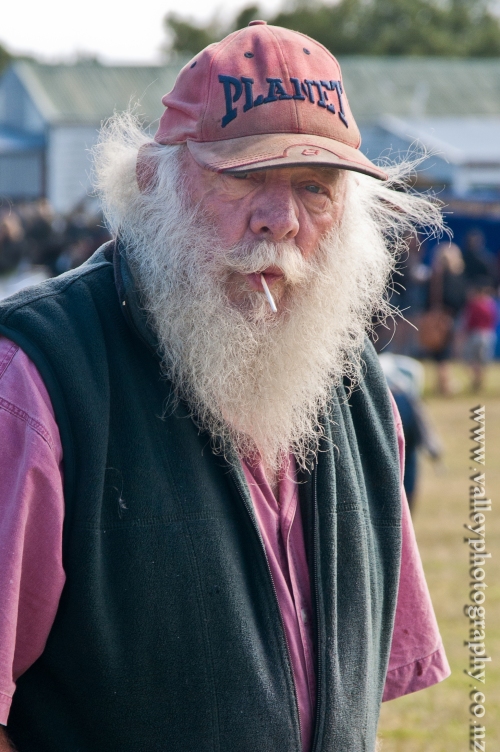 The original shot had the whole torso of the farmer and a little bit too much of that nasty white sky.  I’ve cropped in closer for better composition, and I was delighted to find that he actually was looking directly in to the lens.

I’ve had to slightly lighten up the right side of his face and under the brim of his hat.  I also cloned out an official in a flouro lime-yellow vest over his right shoulder – too distracting.  One thing that was bothering me was his eyes, they seemed dull. I was thinking how much better the portrait would be if I’d had a flash to create some catch lights in his eyes.  I zoomed right in to see if I could figure a solution.  When I looked closely I discovered that there was a catch light in his eye not obscured by his hat.  The sky behind me was reflected in his eye, but only slightly.  Using the magic of Photoshop I isolated the area (barely two pixels high by about ten across) and simply lightened it up to make it more obvious.

I am pleased with the result.  I love his weathered, care-worn face, his amazing beard and fly-away hair.  I also like the low morning sun that side lights his features.  I hope that he’d be happy with this portrait should he ever see.